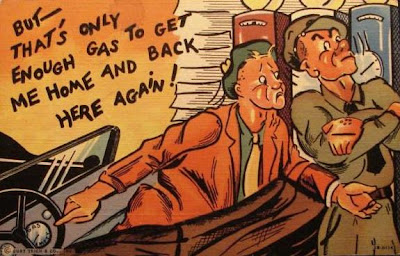 This is a linen comic Curt Teich postcard.  It is circa 1942 (per the serial number in lower right), so that means it is World War II era.

It took me awhile to realize what this postcard was about.  It's a comic, but yet I didn't really see any humor in it, and comics usually make at least an attempt to be humorous.  But after some thought I realized that people in 1942 may have smiled at this - not because it was funny, but because it was so real.

The man in the car is pointing at his gas gauge, which is almost on empty, and basically complaining that he needs more gasoline, but the attendant refuses to sell him anymore, even though the gauge on the pump seems to indicate there's plenty to sell.  In WWII gasoline was rationed, and you could only buy so much in a given period of time.  I'm pretty sure that's what this card is about.