Hello to all.  I'm aware I haven't been posting much on this blog recently.  I've been posting photos (and postcards) on a facebook page, some with more comments and info than others.  I'll probably be posting on the fb page much more in the future.   Here is the link. 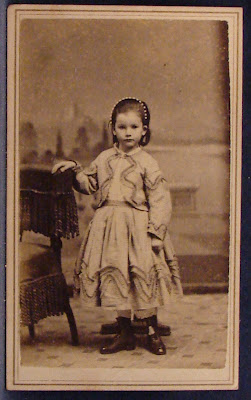 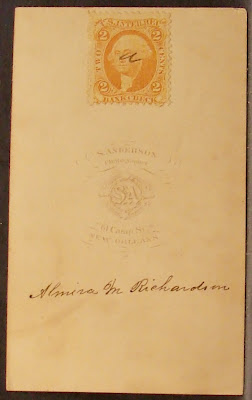 This is a CDV photo of a little girl with the name Almira M. Richardson written on back.  It was taken by S. Anderson of New Orleans.  It is about 2 1/4 by 4 inches, has square corners,  the mount is very thin and it has thin borders, all of which date it to the 1860s.

What makes this interesting to me is that there is an orange two cent  internal revenue tax stamp on back. This were issued by the federal government and were required to be placed on back of CDVs (among other things, I assume) from August 1, 1864 to August 1 1866.

Of course the early to mid 1860s was a time of civil war in the United States, and Louisiana was one of the confederate states.  My assumption is that this tax stamp dates it from sometime between April 1865 (the official end of the civil war) and August 1866.  New Orleans was occupied during part of the civil war period, so it's possible the stamp could have been placed on earlier.

Cabinet Photo of a Man with a very large Mustache - Minneapolis, Minnesota 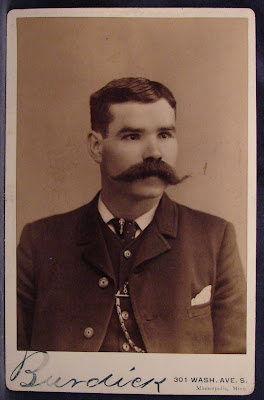 I have no idea who this person is, but I'm pretty sure he's proud of his mustache.  He's very clean cut, very well dressed, but has this wild mustache.  It makes a visual statement, and is a mildly extreme take on late 19th century men's fashion.

The photographer's name is Burdick, and he was located at 301 Washington Avenue South, in Minneapolis. It's pretty close to downtown, and today the area seems to be parking garages and big buildings.  I spent a couple of years in Minneapolis, and part of Washington Avenue was known for bars and live music, but I don't remember the addresses.

I wish I could say more about this photo, but really it's just guy with a huge mustache.

Update: Sold!
Posted by A Valdese Blogger at 2:51 PM No comments: 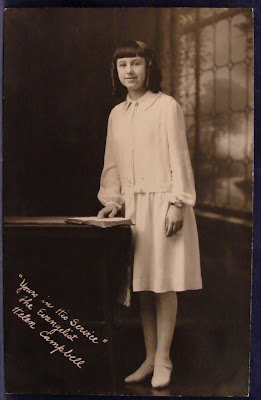 This is a Real Photo Postcard (RPPC) of Helen Campbell.   The inscription on front says "Yours in His service" the Evangelist Helen Campbell.  Someone has written a date on back, "October 27, 1927".   It has an AZO stampbox on back with 4 shaded in squares in each corner, which lends a little credence to the date written on back.  This was a formal portrait, there were probably many, many copies made, and some were made into postcards.

This is a girl who definitely had her 15 minutes of fame.  There is a site called www.girlevangelists.org, and Helen Campbell is listed there along with 100s of others.  Apparently child evangelism was a big thing in the 1920s.  There is a short article about her - she was born in 1915, started preaching at age 9, was associated with the Pentecostal movement, was active in the San Francisco & Oakland, CA areas at least, and apparently drew large crowds.  I also found a couple of news articles and advertisements about her.  When this picture was made she would have been 12 years old, and more or less at the height of her fame.

I have no idea what happened to her.  I had never heard of her before I came across this postcard, and I don't know what she did in later life.

You're only a child prodigy when you're a child.  At a certain age, you're not much different than anyone else who may be gifted in whatever area you're a prodigy in.  I have a feeling this is what happened to Helen Campbell - at some point she was no longer a child evangelist, she was just an evangelist.

I could find nothing about her personal life, other than she traveled with her grandmother.  It is even possible that she's still living, she'd be in her late 90s now.

Posted by A Valdese Blogger at 3:50 PM No comments: 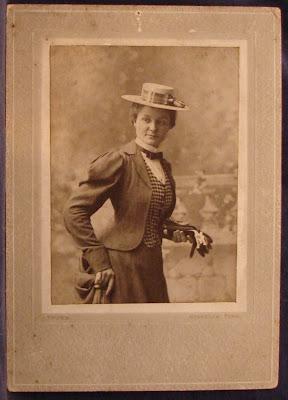 This is a late 19th (or very early 20th century) photo of a quite fashionably dressed woman. She's wearing a straw hat (I think it's straw anyway), a white blouse with a bow tie, a checkered vest, a jacket and holding gloves.  One can infer without too much effort that's she's also wearing a corset, which was pretty standard for the time.

She is very stylishly dressed.

The photo was made by Thuss of Nashville, Tennessee, and there is no other identifying information.    This was a professionally made studio photo, not a candid snapshot, and she was posed with her side to the camera.   It's not an unheard of pose, but it is unusual & adds a bit of interest.

Posted by A Valdese Blogger at 9:50 AM No comments: 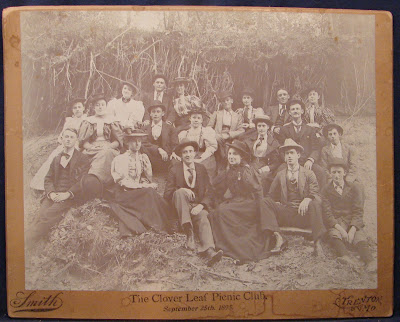 So, 118 years ago members of a group call The Clover Leaf Picnic Club got together and had their picture taken, and an instant in time was captured and still survives. A bit faded maybe, but in the world of antique photos, it's alive and kicking.

I think there are 20 men and women in this photo, all look to be in their 20s or 30s. Everybody is pretty well dressed, much, much, MUCH more formally than people would be today.  Especially for a picnic.

I've looked at each individual, with a magnifying glass no less, just to see fashion details and expressions.  One person, the woman in the light blouse in the front row, is not looking at the camera.  I wonder what she was looking at and was thinking about.

This a large photo, almost 8 X 10.  The photographer was Smith of Trenton, Missouri.  My attempts to find anything about The Clover Leaf Picnic Club remain aggravatingly illusive.  Maybe I could contact the Trenton, Mo. Chamber of Commerce, see if they know anything.  I suppose it was a social club, a means for young men & women to put themselves in close proximity to each other during the late Victorian era.

Posted by A Valdese Blogger at 11:13 AM No comments:

Antique postcard - a PSA for women born in August. 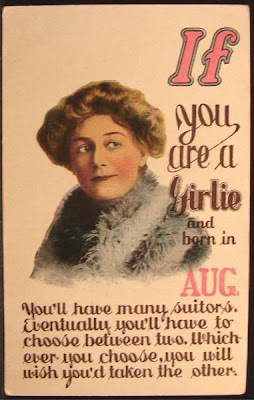 I decided that the first day of August was as an appropriate time as any to post this.  This is about the only time ever that I've been anything close to topical in any way, shape or form.

This is an early 20th century postcard & I suppose it qualifies as a comic.  I sure it was intended to be humorous.  And it does, in its way, illustrate one of the larger conundrums of life.  You make a life choice & chances are down the road you'll wonder what things would be like had you chosen differently.  Frequently people think a different choice may have been better, but there's just as much chance it would be worse.  You don't know.  That's life.

I'm sure there's one of these for every month of the year, but this is the only one I have.

Posted by A Valdese Blogger at 1:04 PM No comments: